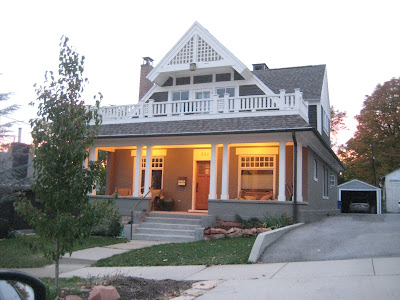 My neighborhood is loaded with bungalows.  I think it might have to do something with the fact that about the same time the Avenues were becoming the hip new neighborhood for 'starter homes', the concept of buying ready made floor plans was also making an appearance on the scene for the first time and leading the pack was an architect {a contemporary of Frank Lloyd Wright} specializing in - yes - the bungalow.  With out doing a dig around on the web to back up that statement, that will be my semi-reliant assumption.

Needless to say, I see a lot of them, some I dream of gutting, others I dream of walking through the front door and staying awhile.  This would be an example of the latter.  I saw it last Saturday driving home wishing for higher ground because of the giant pink sunset going on behind the trees.  Instead of making it the rest of the way up I Street for the grand view, I flipped around to snap a shot of this home.  I'll never know what kind of sunset I missed, and I'm not about to say it was worth it to now have a picture of some stranger's home to post on my blog, but I do like it a lot and will save it away in the file with the other 'serious curb appeal' photos I've collected. {love the 'come hither' lighting on the porch! It just sucks me in.}

Labels: best house on the block