and then there was change 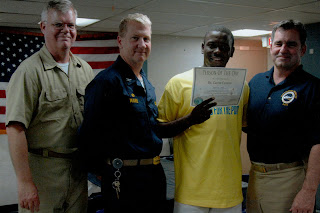 the good news: I was asked to go back to Haiti after graduation.

the bad news: Not going to happen anymore. The project was called off.

I'm disappointed, but definitely not discouraged. When I was asked to go I was ecstatic. I could barely contain myself as I mentally started packing my bags. It was the best case scenario. Graduate, then take a month to figure out my next move while throwing myself into some good hard work.

I'm torn in so many directions it is hard to fathom ever getting everything to blend together into a cohesive plan. All I know is somehow there has to be a way for me to combine design/humanitarian aid bc I love both equally.

The picture above is from April 2009 when Carter was given the Person of the Day award for his dedication to helping his people succeed. Carter is my friend I mentioned before who is living on the streets in Haiti with his wife and two sons. He is in trouble because the 'bad guy thugs' know he has friends in America and have targeted him as someone to kidnap and ransom because of his connections. I second President Monson as he asks for our prayers for the peace and well being of the people in Haiti.

I can't even imagine Carter's reality right now. And my giants are CAD and waking up early for my business class. I think I need a reality check.