I have a knack for organizing myself into confusion sometimes. It is partly due to the way I like to move things around so much. It feels more clean to me somehow. I'm not as neurotic as the next fruitcake, but I do like to line things up straight on my desk. And even more than that, I like to throw things away. Especially lists. I make lots of them and when I've crossed everything off I throw them out with a certain sense of satisfaction.

With the way our note pads migrate around the office and hide whenever I need to write something down, I write on the back of other things in a pinch. Forgetting that the other side might be important...

When it comes to finding something, especially a piece of paper, Karen jokes with me and asks if I have filed it {aka thrown it out}. I have found many a lost thing in the trash.

Just the other day she told me not to misplace this post it note. So when she came looking for it I don't know why I even thought for a second I wasn't to blame for it not being where it should have been. I claimed innocence I was so sure.

No way did I file it. Not this time.

Not only filed, but shredded. Can't fault me for being tidy. 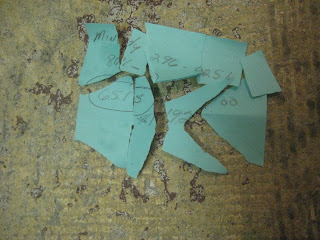