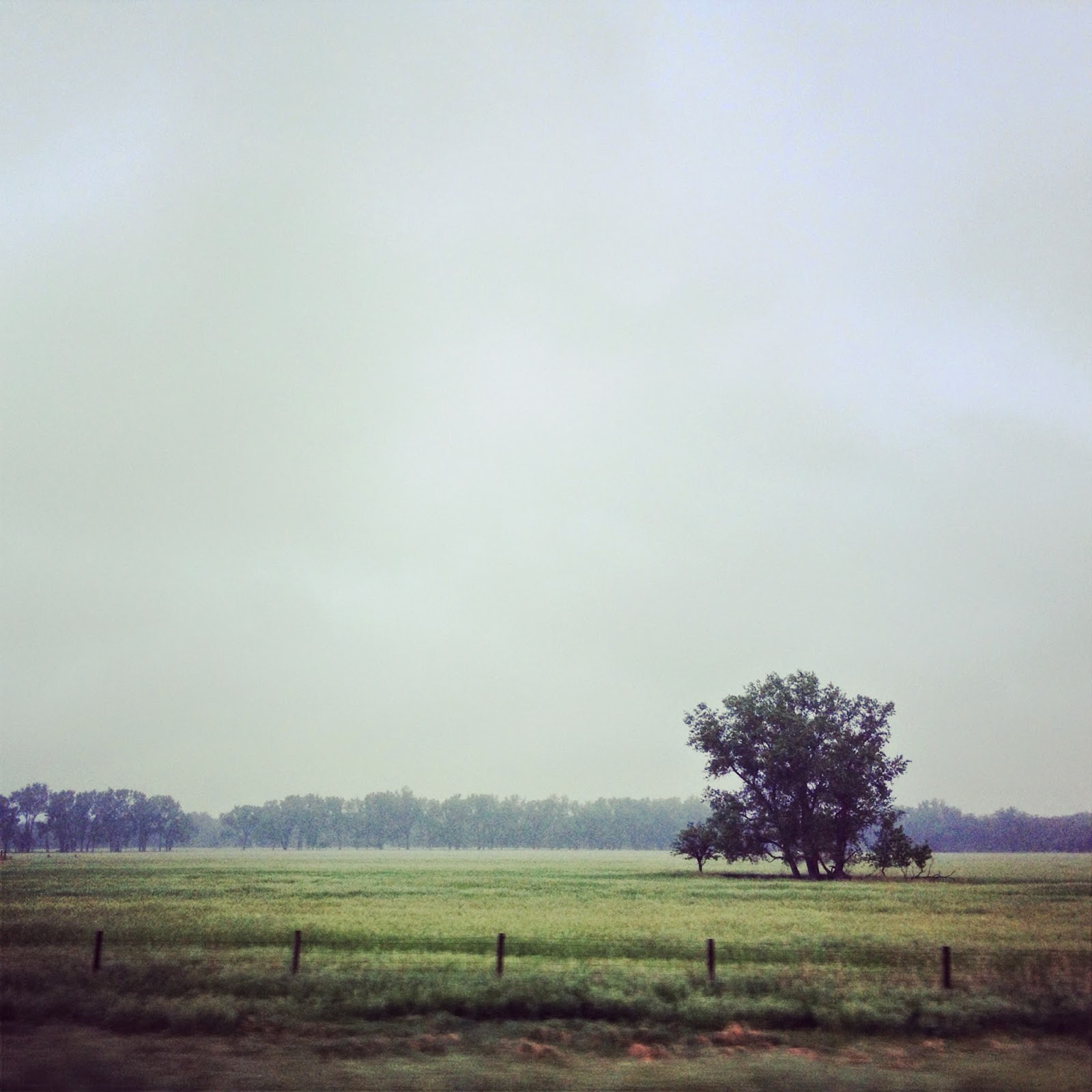 June was a much anticipated month.  Once the decision was made that we were both DC bound that's where my thoughts would go if ever given a moment to explore on themselves. And to kick it off with a nice big fat road trip made it all the better.  Road trips are so good.  As David observed as we were laughing ourselves silly over something that would only be funny if you were there in the car with us between here and there, you enter into another dimension out there on the road. Things that normally wouldn't happen actually do happen and seem entirely normal.  Or all the more abnormal....  It's the way things work. 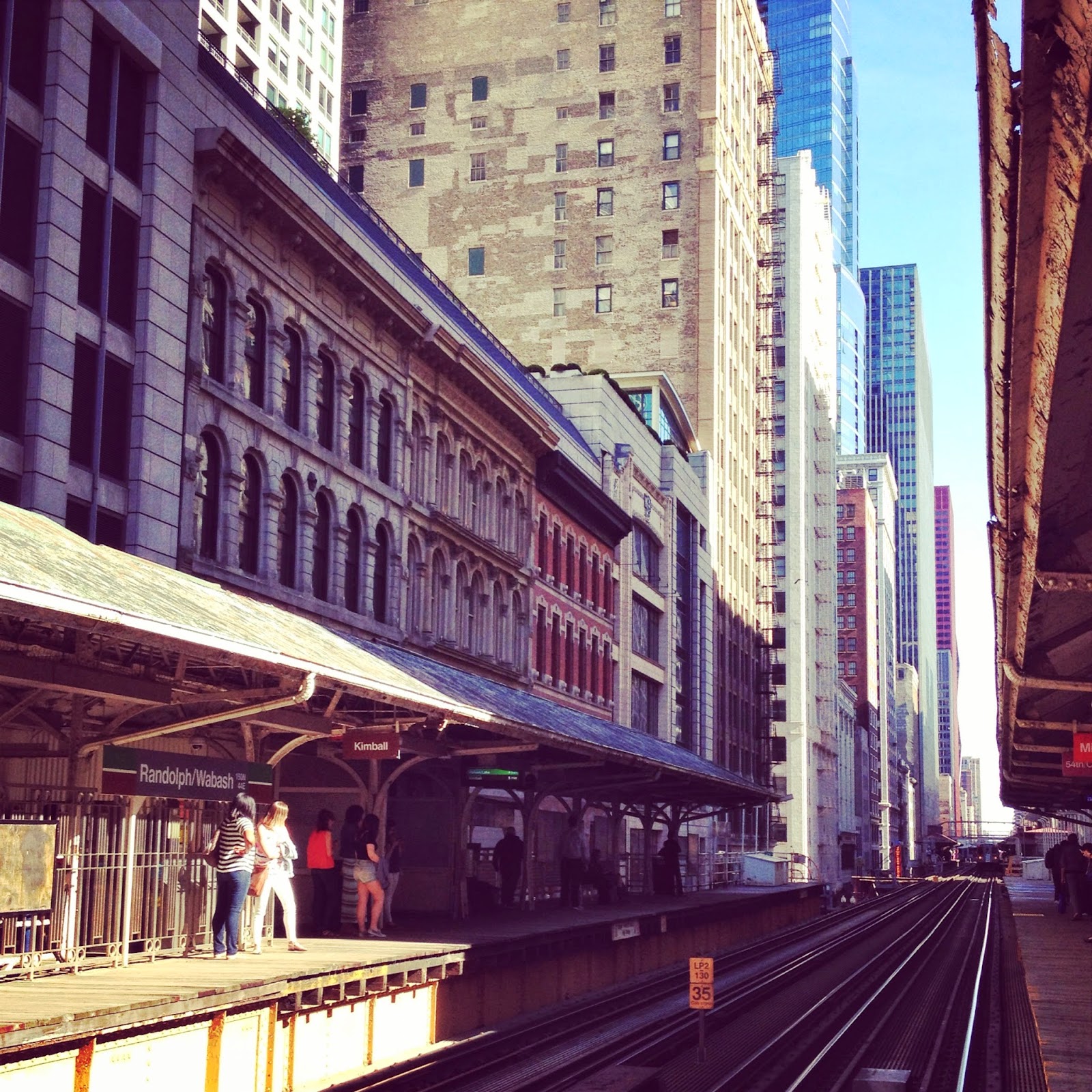 It wasn't really out of the way exactly to swing by Chicago on the way.  Why wouldn't we go.  That was my thought when I saw it there along the map right in the middleish where we might want to get out of the car for a bit and stretch our legs.  And stretch we did.  We walked from the apartment we rented along the parks lining the lake to Millennium Park, then over to Magnificent Mile, enjoying the river along the way.  From there we looked up near by restaurants and the first one caught our imagination so off we went on a walk to Wicker Park.  Not exactly a little walk from downtown.  By the time we got to Native Foods we were thirsty and really ready for lunch.  This little restaurant will live on in memory as the vest vegan restaurant I've been to yet.  I'll leave it at that.  I could go on and on and tell you about how I entertained the idea of owning a franchise and opening one in our beloved Avenues, but I'll just let that dream hibernate back there in the far fetched corner and dust it off from time to time. 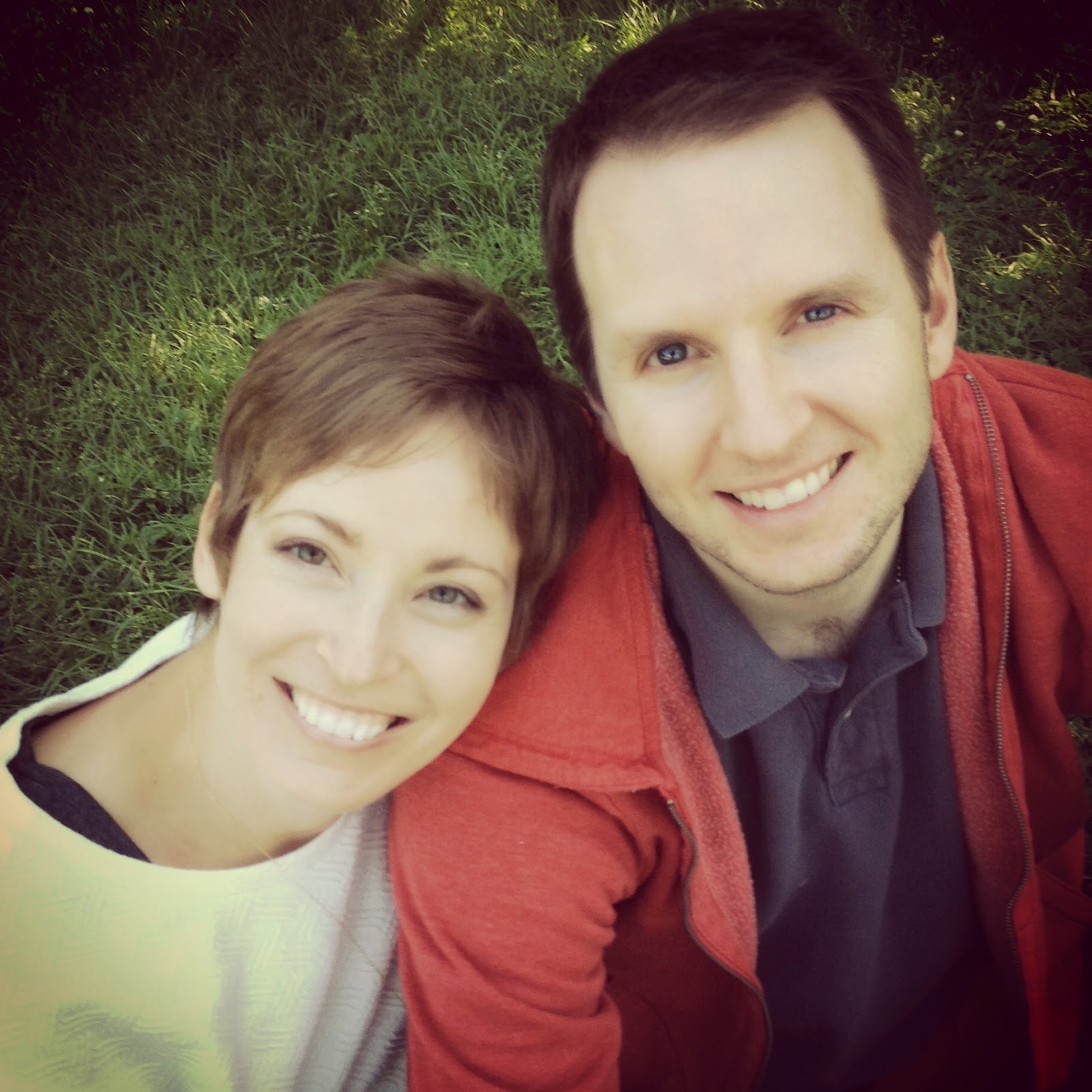 As if we hadn't walked enough, we explored Wicker Park and as we were sitting in the cool grassy shade this guy came up to us and paid us all kinds of the nicest compliments and asked if he could take our picture.  Then asked if we were an item.  If married is considered an item, then yes.  He seemed to think so.  We walked our way all the way home after that and after bit of downtime hopped on our bikes and road over to a Thai place to pick up take out to eat while watching Foyle's War.  It must of been in the stars that day to eat only the finest things.  If it's possible to have two encounters with life altering food in one day we did it.  Best green curry in my life so far.  Why are all the best foods far flung across the globe?  The dream of the best stake of my life tempts me from South Africa to this day. 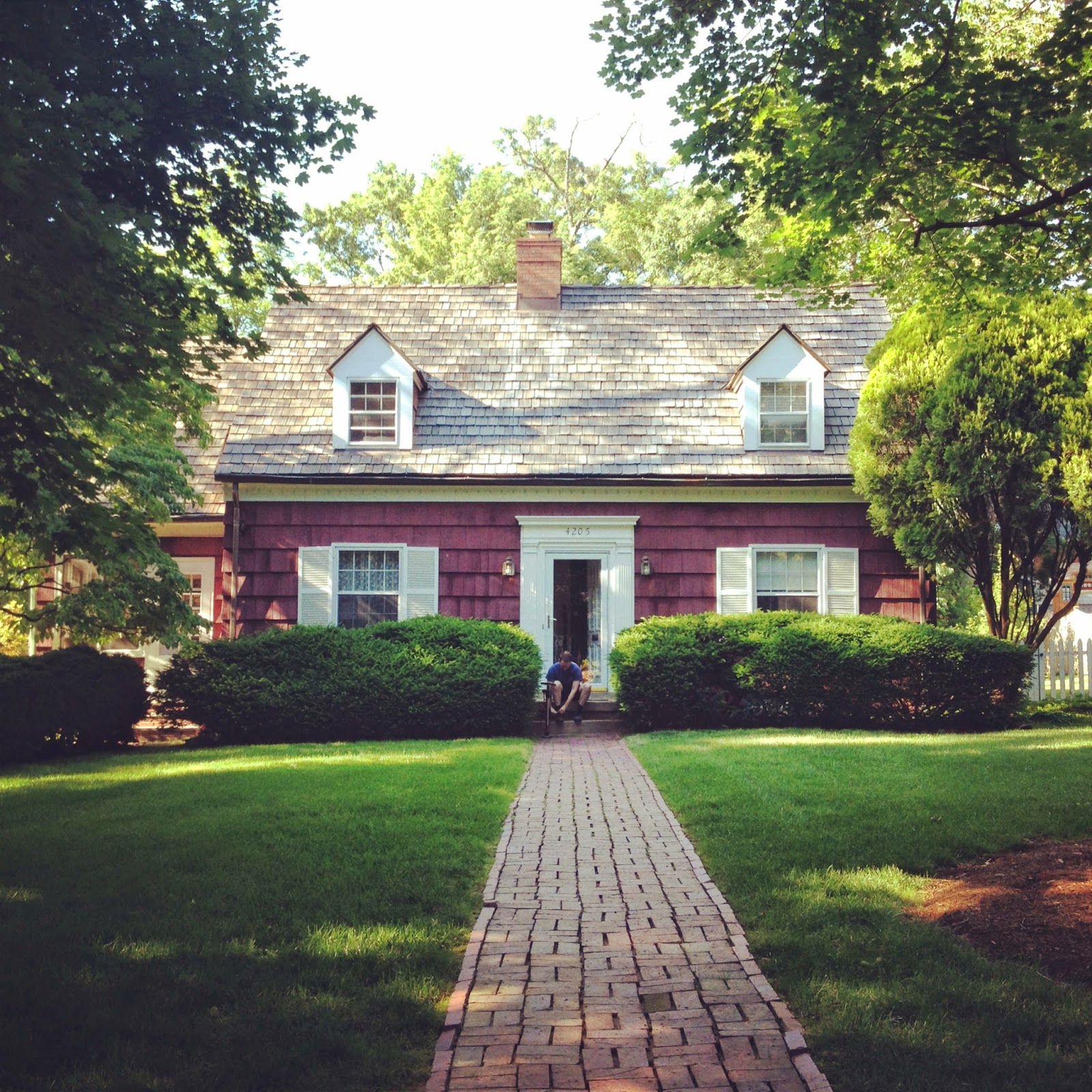 After a delightful night with Vicky and Serge and waking up to dappled sunlight and the refreshing sound of rushing water in the stream in the backyard, we went to Kensington to move into our little red house for the summer.  Finding this place is part of a string of miracles that strengthens my belief in a loving Father in Heaven.  Our marriage has been full of those undeniable miracles.  Having a place to live rent free convenient to the metro happened so naturally it felt meant to be.  A week before we left I found an internship with a company that has turned out to be one of the best I've worked for.  It just so happened that it's 3 miles from home.  Miracle number one hundred and I've lost count. 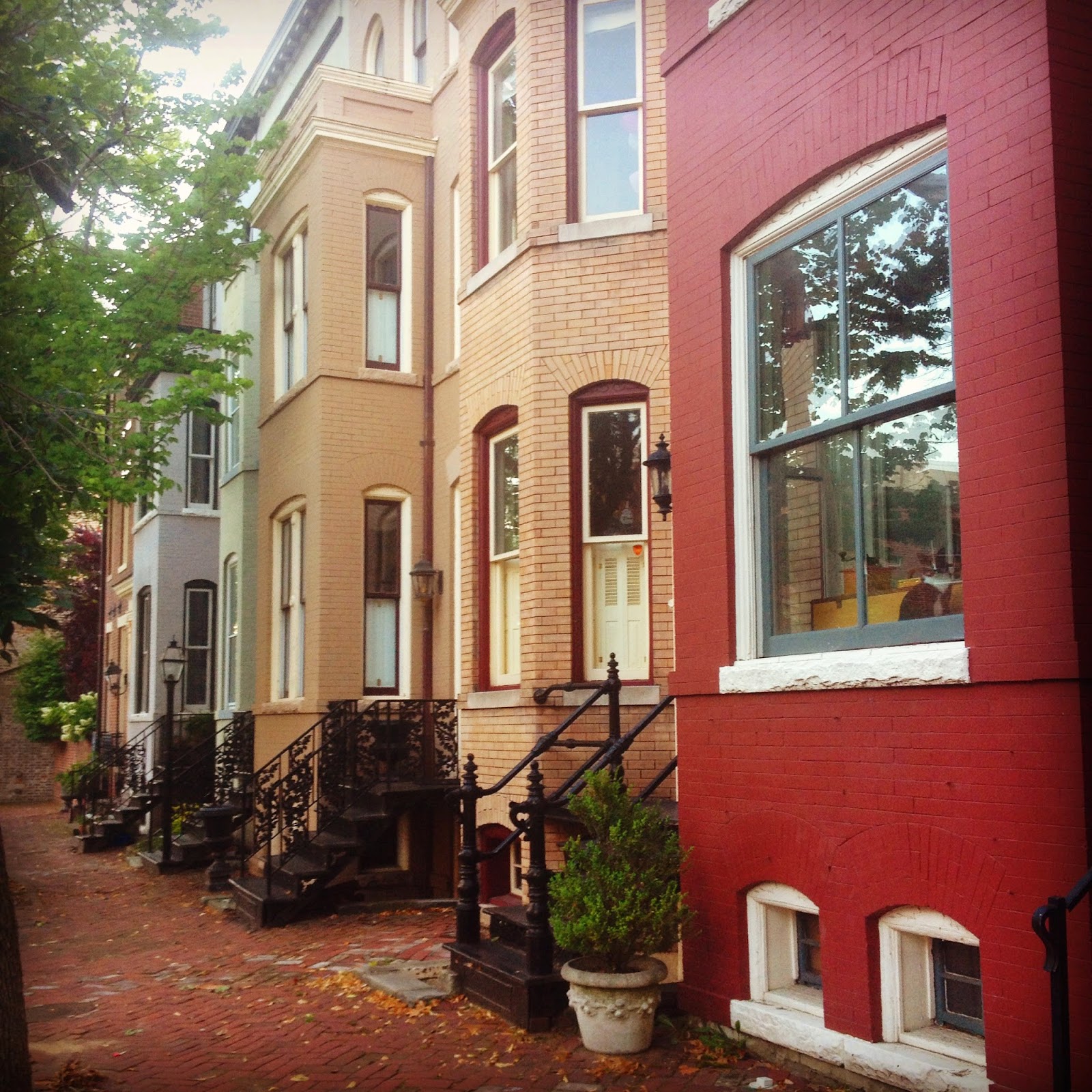 A Friday night date night took on the the train to Old Town Alexandria.  We walked along King Street watching the people and looking for just the right restaurant for dinner.  We found it in a little Thai place by the water where we could sit out on the porch in the lowering light.  We crossed the street to say hello to that kitty in the window already missing our kitty back home. 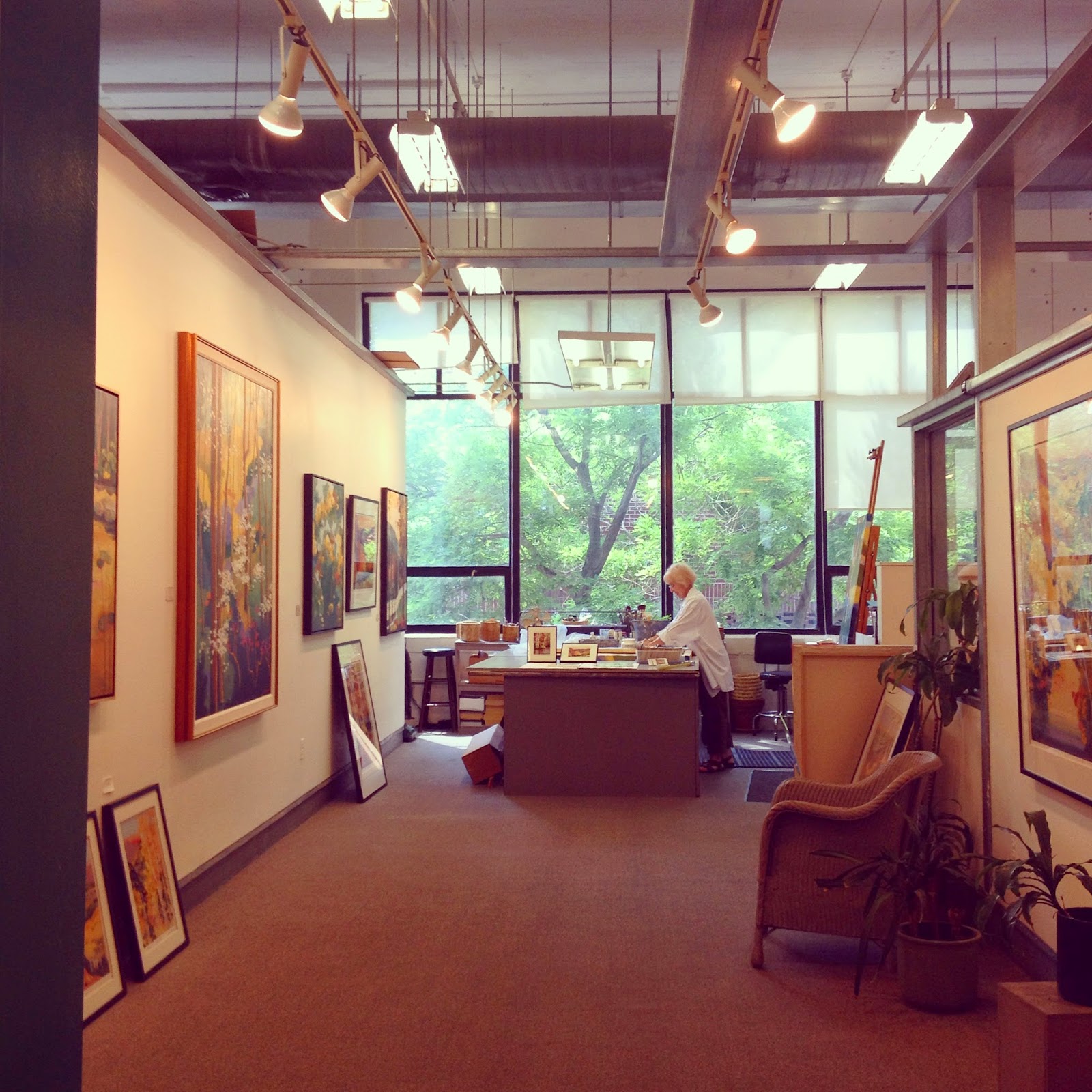 The Torpedo Factory!  This place is still one of my favorite memories to this point.  I was back in Alexandria the next week for work and when the install finished up early I walked a few blocks over to wander around inside the working artist studio galleries.  Many of the artists were there working and ready to chat.  I had some meaningful exchanges full of encouragement.  It was soul quenching to talk to perfect strangers about my real fears of being an artist. Why be scared?  Just keep doing it.  That's what I've decided for now. 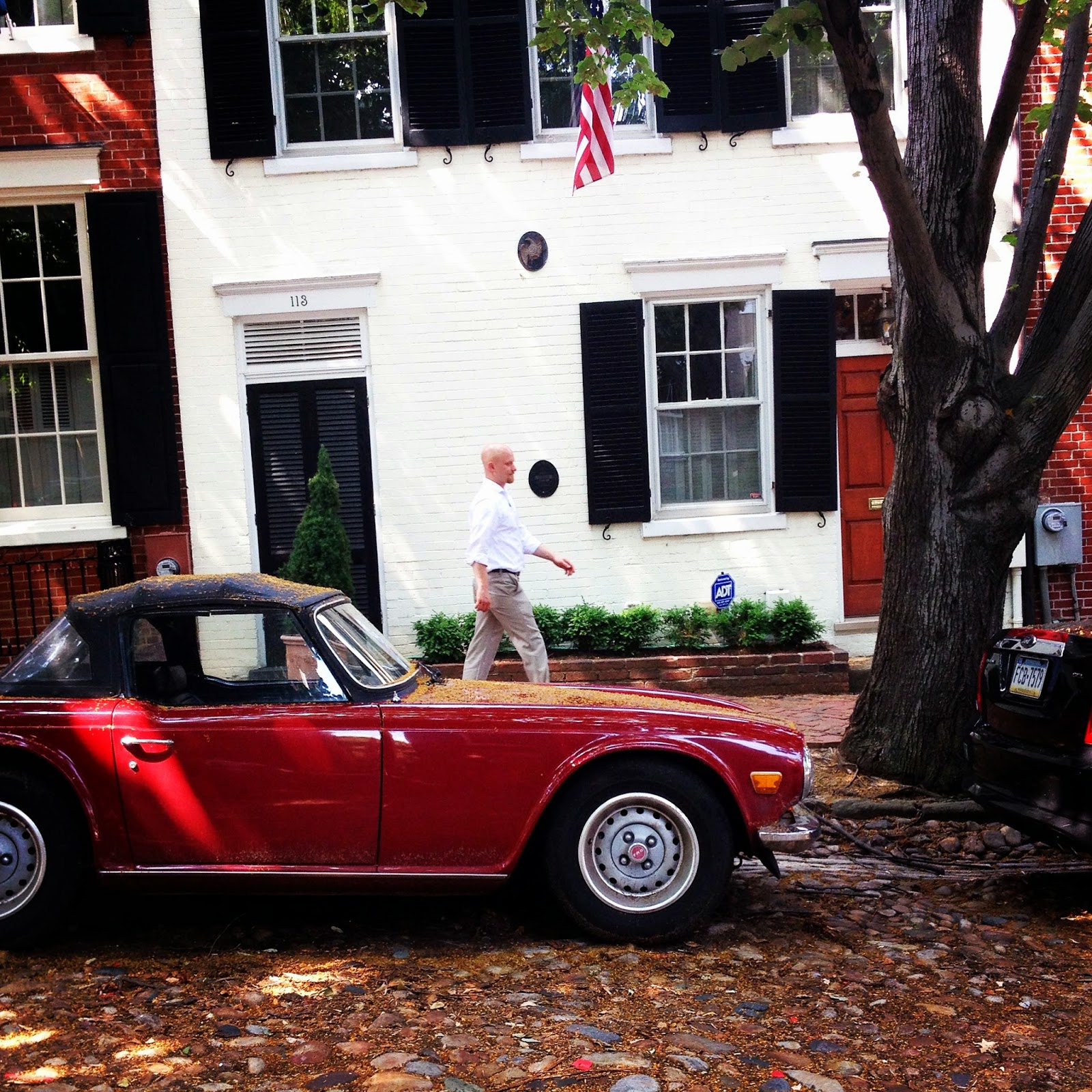 Cobblestones on Prince Street.  I turned a corner and there they were all lined up in busy rows circling around each other and struck through with all kinds of leaf litter.  And all that distilled sunshine made for the best kind of wandering.  Every now and again I have moments like that where I can see potential in everything around me.  I want to paint it.  Design it.  Get run over by it. 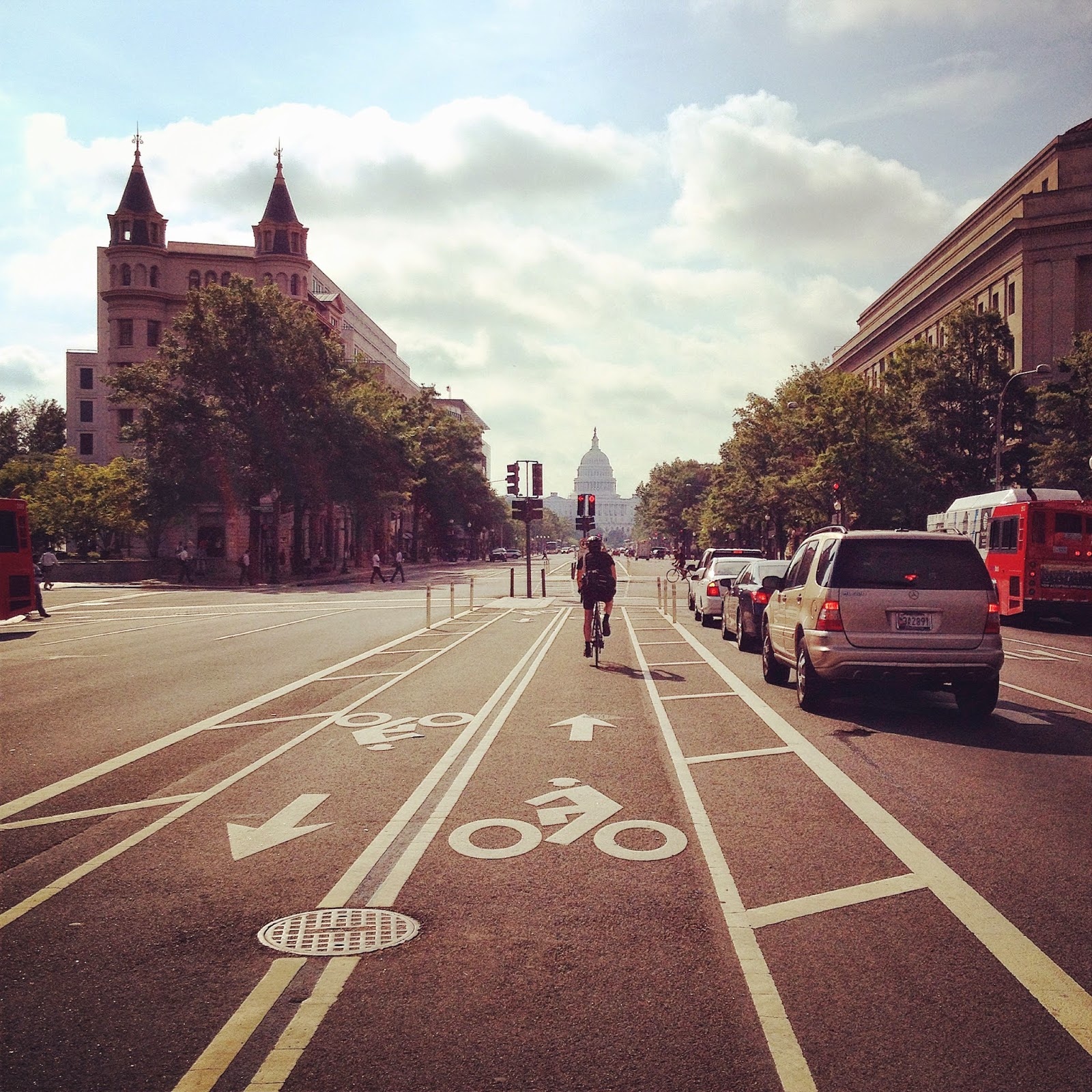 Super Dave rides his bike to work once or twice a week.  I tagged along and decided it in the 16 miles each way you get a good sampling of every type of thing you might imagine on a bike ride.  A few different neighborhoods each different from each other, some light trespassing to cut around a construction zone, a fun bit where you get to carry your bike through a crack in a fence and down a slippery embankment to a bike path that goes under a building and drops you off in the heart of Bethesda Row a trendy little neighborhood near my work, then along the Capital Crescent Trail, over the canal at Georgetown, across the Key Bridge to the Mount Vernon Trail, cross over the Potomac River again on the Memorial Bridge this time, then on to the National Mall to pass by a handful of Memorials, over to Pennsylvania Avenue past the White House, continue on a stretch with the Capital down the road to work at the NGA.  It makes for a nice run on sentence and a pretty great ride too I think. 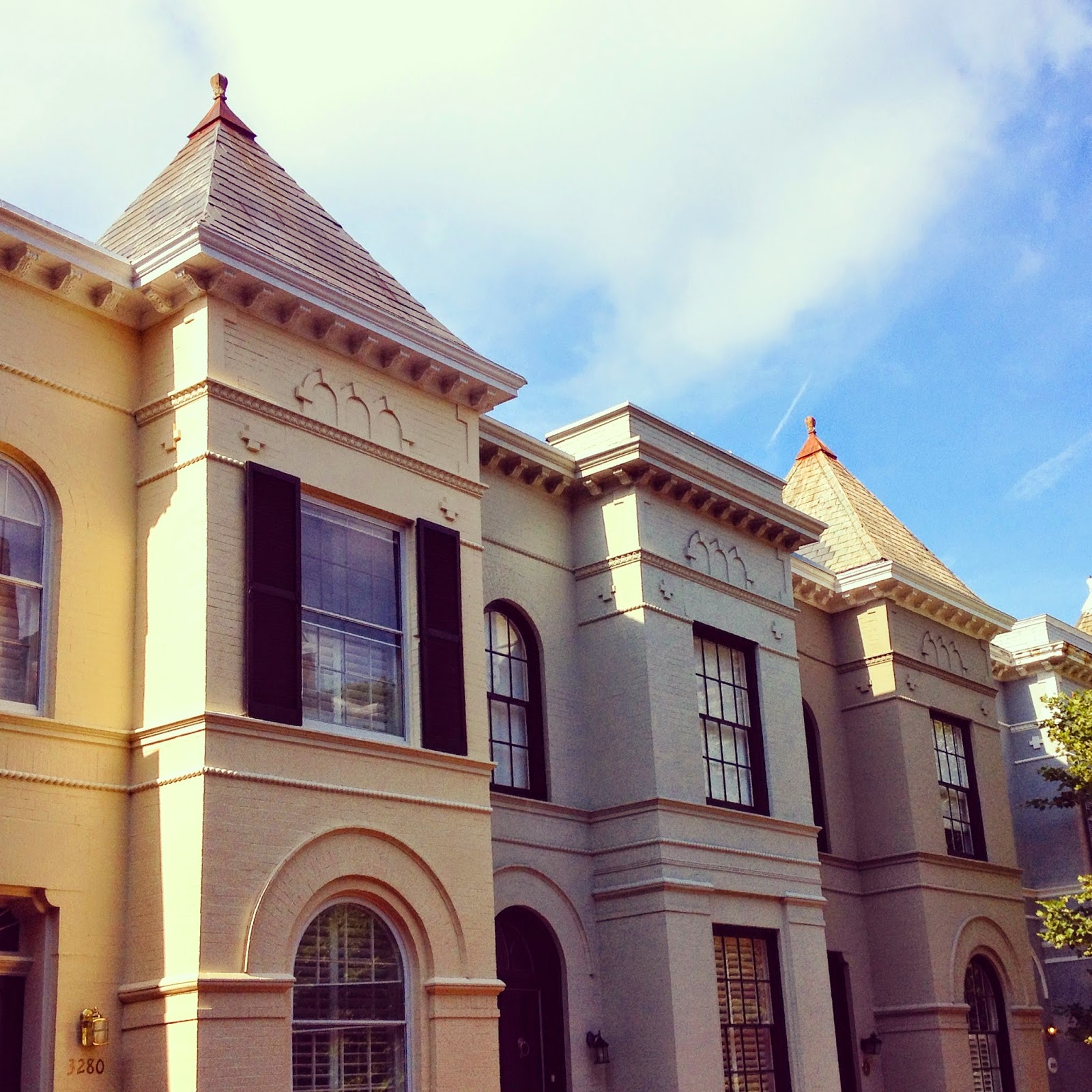 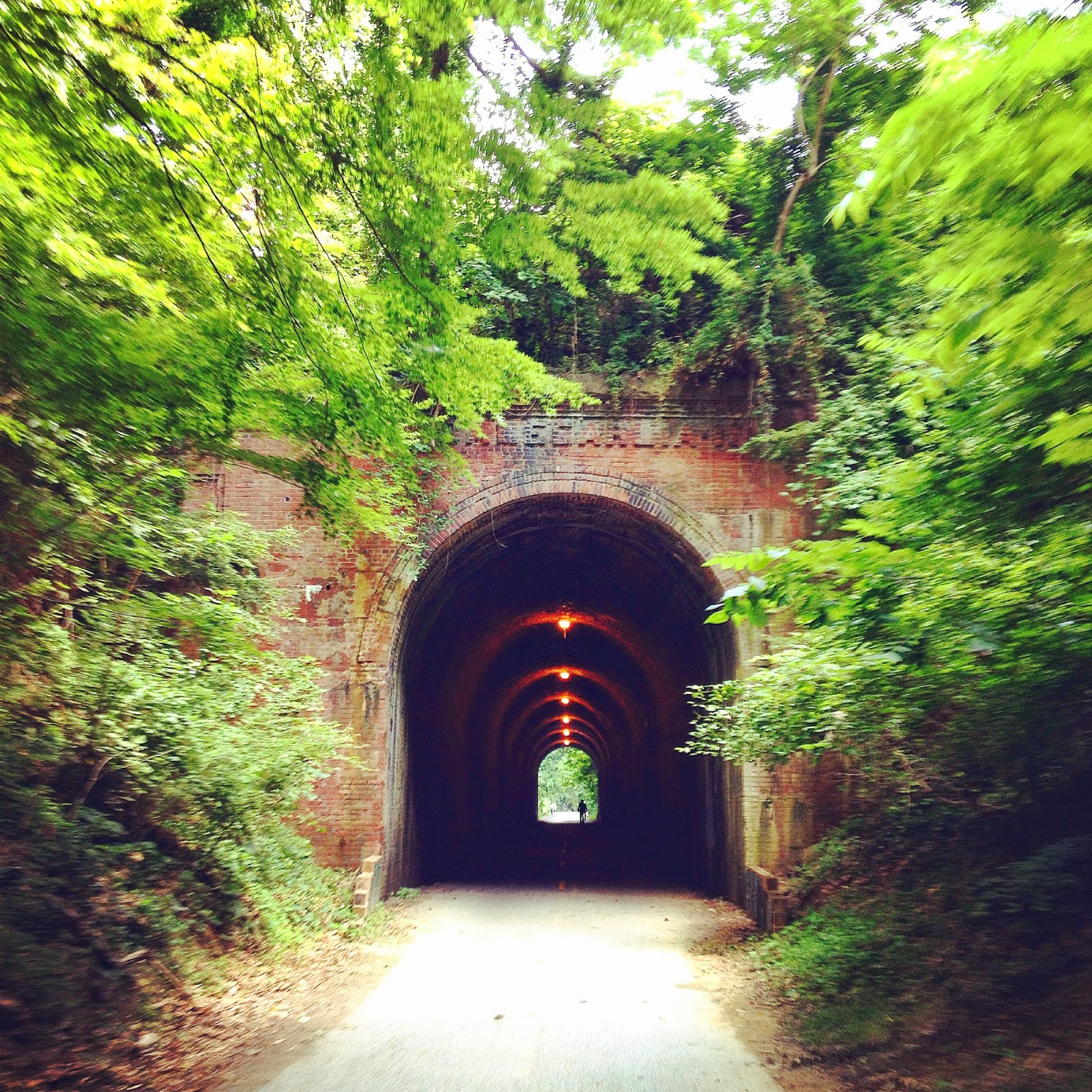 The tunnel on the Capital Crescent Trail. 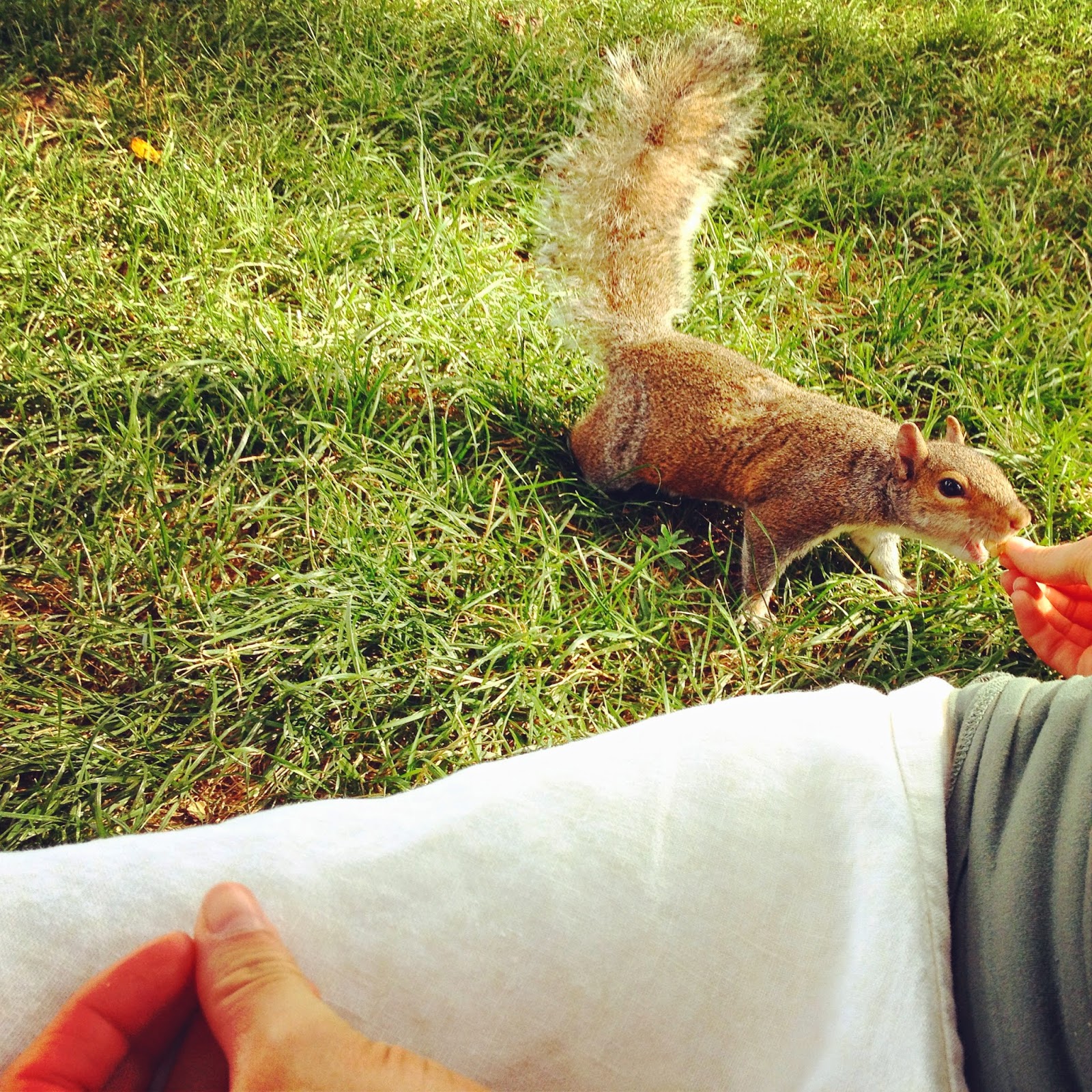 The squirrels that live along the National Mall are fearless and well fed. 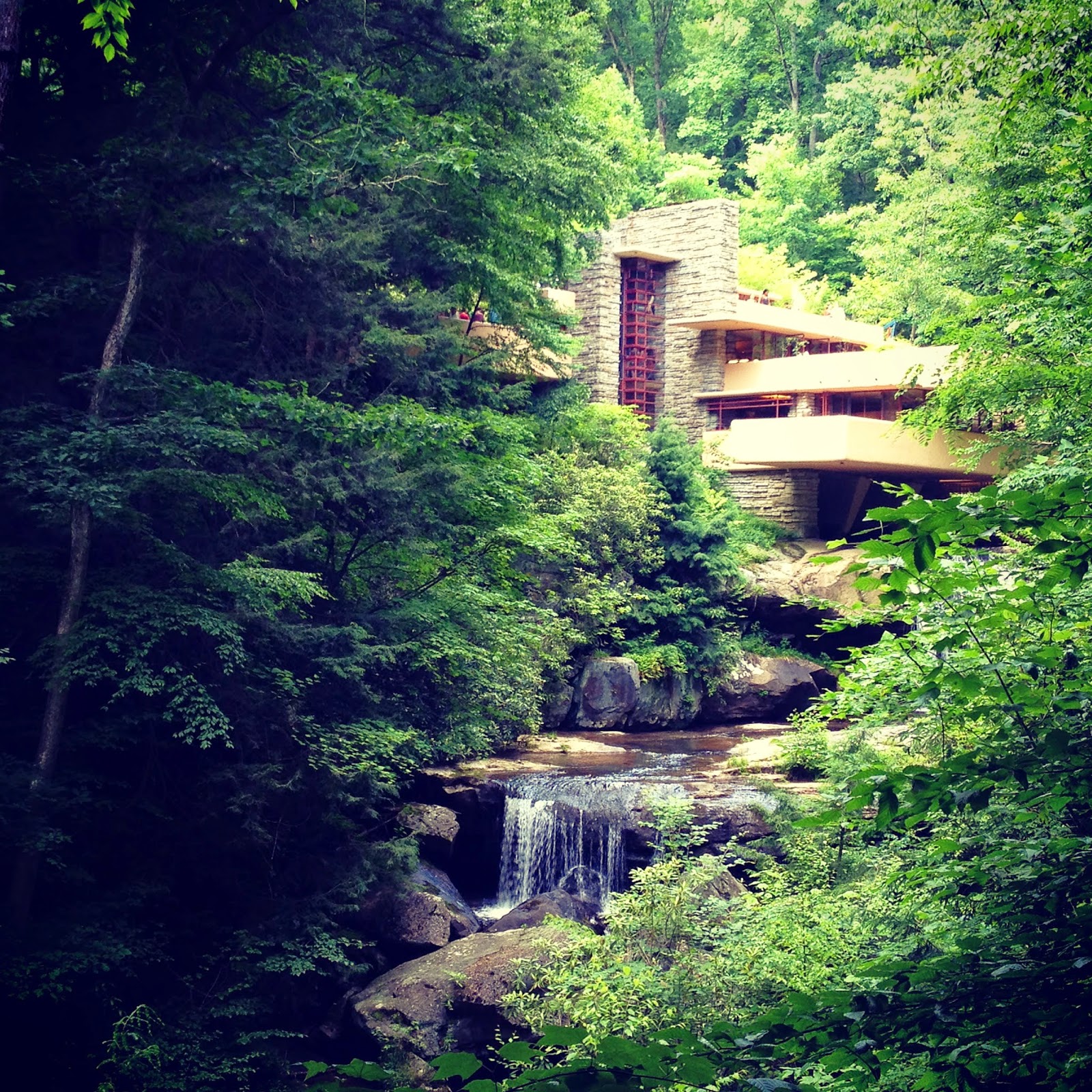 Worth the three plus hour drive to Falling Water.  Even if we didn't make a reservation so we could only tour the grounds.  We stole some peaks inside which only made it all the better for subterfuge sake.  Plus, we had an adventure along the way in Cumberland.  The creepiest ghost town ever.  Not exactly a true ghost town, but it has the feeling of abandonment.  And the biggest flea market I've ever been to. 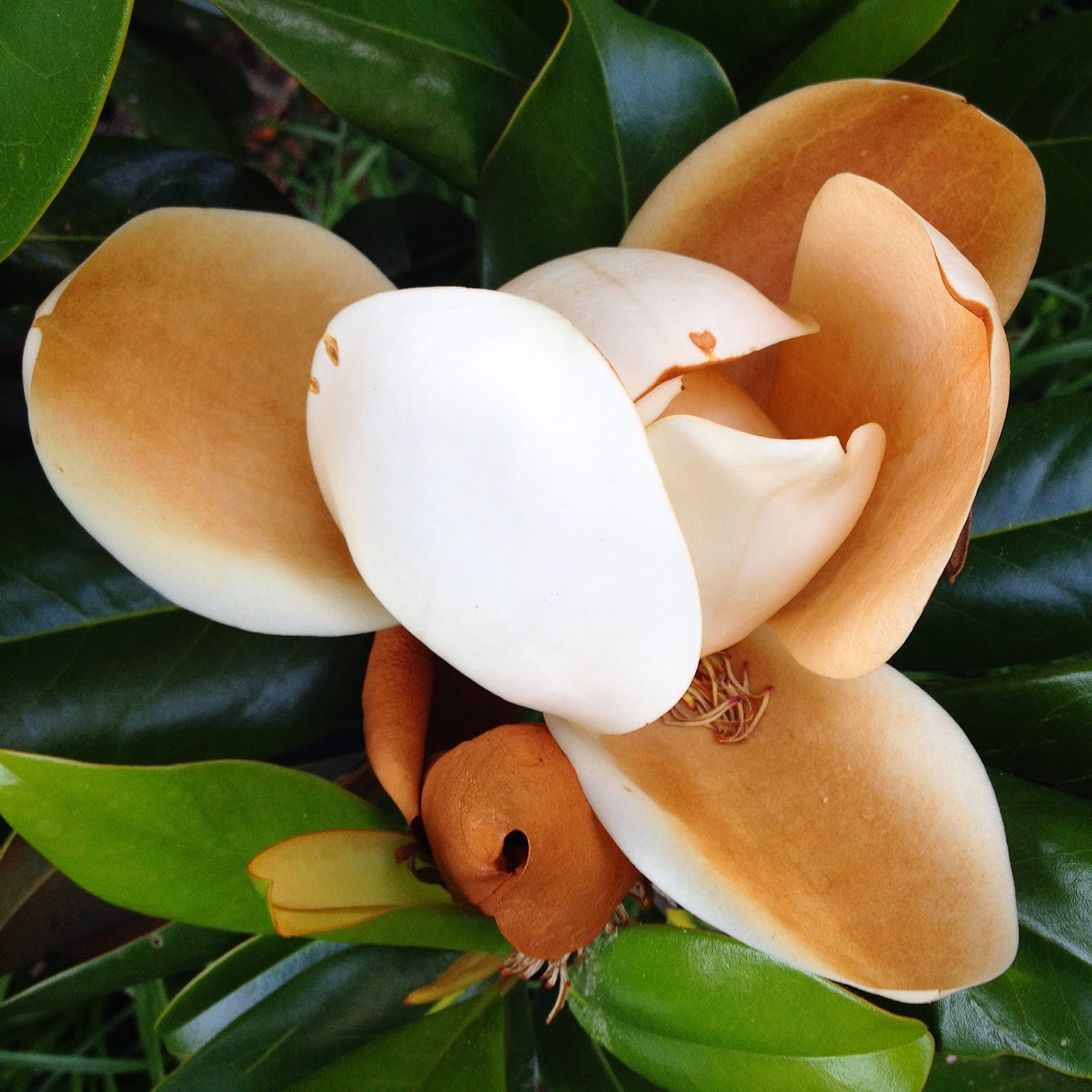 The trees here are beyond words.  They make me feel so small.   This is a bloom on the magnolia giant down the road.

And that about sums up June.