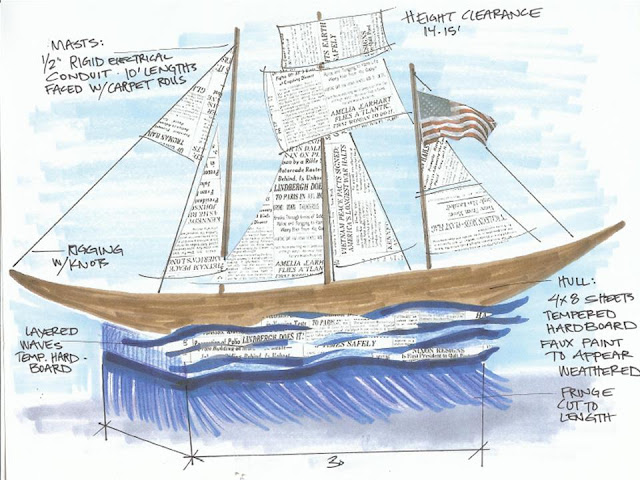 When I was asked to design a float for the Davis County Clipper {small local newspaper} I said:


Sure, why not?
{The most dangerous sentence in my vocabulary.}

I pitched what I believed to be a hair brained idea to the owner to "Sail into the Future" with the Davis County Clipper by building a Clipper ship. I call it hair brained because of the tiny budget I was given, the grand scale idea of creating a ship in a little over a month, and my lack in experience of building floats, or ships.

With an enthusiastic "Full steam forward!" from the boss man we started in on extensive planning meetings.  I stressed the importance of talking over any changes from my original plans because I was really concerned about the proportions of the ship.  I knew there would be changes, I just wanted to be on them. With a 14' height restriction I knew making this thing look right was going to be tricky. 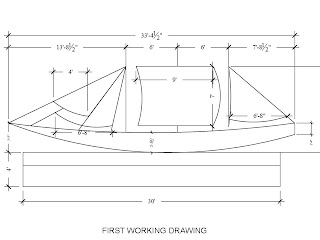 We hit gale force winds when construction began.  I'm all for difficulties, I do love a good challenge, but not when my instructions are taken as suggestions.  That kind of challenge is a waste of energy.

1- I'm an easy going leader, always have been, and suppose it always will be because it is my nature. But when it comes to important things I wish I could whip out a scary designer persona to get the point across that I'm in charge for a reason.  Someone has to have a plan and when I'm that person, I expect to be involved with decisions and changes...sigh...
2 - Budgets are fluid when the CFO of the company involves himself in your project. Sure, this involvement created more issues than I cared for, but I'm focusing on the positive here. Not often have I had a budget double in size.  I'll gladly take the flux in funds, but I would have used it on the originally planned fantastic rolling waves and other details lost in the mix that comes with having two chiefs {or Skippers, in this case.} 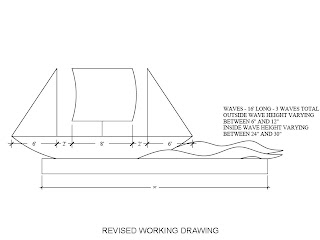 3 - Optimism is easy to come by when things are going my way. Harder to muster when I'm sitting alone on the dusty pavement in the shade of my car staring at the guts of the monster I created. Optimism can come in the form of shimmering plastic ocean and fantastic friends to the rescue.

4 - I have amazing friends and family. This isn't something I'm just learning. I've known this for a long time and continue to be amazed by the people in my life.  Heartfelt gratitude for them because they brought laughter and perspective when I wanted the beast to go sail away to Nebraska or wherever bad floats go to die.
{special thnx to Tony, Michele, Cade, Ashton, Parker, Christi, Ryan and RC1.}
Standing back and gazing up at the beast at 2 am this morning after the last festoon was stapled into place, I can't say I feel like a complete failure, the float will float on.
The Centerville Parade with a crew of 3: Casey, Cade and Miss Utah.  The first of five Davis County parades for our dear Clipper.

As for my future in ship building?  I'd rather just sail off on an adventure somewhere on one.  This week last year I was passing through the Panama Canal on my way to Nicaragua and El Salvador.

for kicks and nostalgia sake... 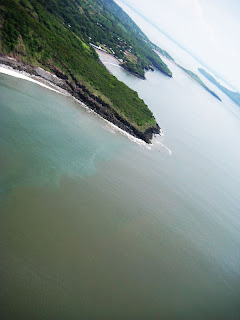 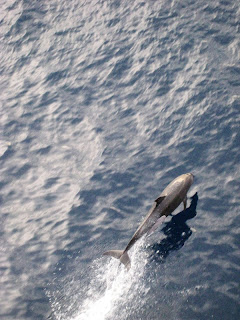 Above: El Sal from the helicopter. 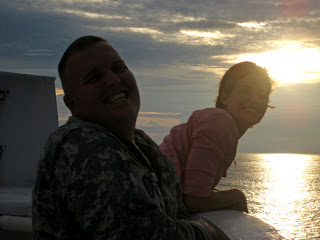 Me and Staff Sergeant Rix {no relation}, watching the dolphins after dinner.
Now that's how I enjoy a ship.